How did we get here? (Blogging about our family over the last 2 and a half years)

We’re not exactly sure how we’ve arrived at this turning point, but we strongly feel that there were other families in our situation that might be having a similar struggle with autoimmune disease, leaky gut or diabetes.  We decided this was the right time to talk about it and hopefully reach out to families like us.

Two and a half years ago, after recently getting married, and a move 2,194.4 miles across the country from San Diego to Atlanta, we found out that our son Miles had Type 1 Diabetes, a type of auto-immune disease that strikes children.  He had been getting sick for several weeks and after multiple trips to the pediatrician for a tummy ache, they did the test that would change our lives, and Miles’ life, forever.  His blood sugar was over 800 and he was close to a diabetic coma by the time we got him to Children’s Healthcare.  Thank God they knew what to do because we were in shock! We just thought he was suffering from heat exhaustion playing summer baseball and then having tummy problems.

We never dreamed he had Diabetes, he was young, extremely fit, and had never really been sick in his life.  Now we hear the news that he will need to depend on insulin for life to survive.  We weren’t prepared for the news, however, we somehow made it through the 2- day required class at the hospital that would allow him to come home once he stabilized.  Suddenly our somewhat carefree life for the kids was turned upside down.  All I could think about was “if I screw this up, our son dies” and I was a mess.  Luckily the doctors at CHOA were amazing and we left with a plan despite feeling denial and shock.

We got used to round-the-clock blood testing and counting carbs.  We all had calculators with us at all times, running the numbers to keep Miles safe. We were typing in his levels to the diabetes app 4-5 times a day, basically putting the poor kid under a microscope.  Life for everyone changed, not just for Miles! Looking back there were some signs this was coming, that darned hind-sight being 20-20 and all.

We were finally settling into the diabetes routine when our other son Max started getting sick, but it wasn’t the same as Miles.  Max had constant stomach aches, nausea, diarrhea, and vomiting.  It was to the point that the poor kid was pooping 10-20 times a day.  We couldn’t go anywhere!  I remember one day we went to Six Flags and I spent half of the day sitting outside of the boy’s bathroom waiting for Max while everyone else was having fun.  What seemed like food poisoning or a stomach bug at first was getting more and more alarming.  We had him tested for food allergies at the pediatrician but they said he was fine (aka, we don’t know what is actually wrong with your son).  We thought he might have had a gluten or dairy allergy ( he had been getting phlegm when he had milk) but the doctors said that wasn’t the case.  We were stumped!

A few weeks after the Diabetes diagnosis for Miles, we let both boys go to a birthday party and sleepover at their friend’s house.  I spent lots of time explaining insulin and left 3 or 4 phone numbers just in case (I was being paranoid clearly).  Things seemed to be fine, no calls or emergencies!  Then at 3 am my friend called and said you have to come right now and pick up your son, he can’t stop throwing up.  I assumed it was Miles with high blood sugar.  I was wrong!  Miles was fine, Max was in distress!

I raced over and Max looked like death warmed-over.  He was exhausted and humiliated he had ruined the party, everyone had such a great time eating pizza and ice cream cones! My friend’s house had taken the brunt of his sickness and I was so mortified that we had caused this awful experience.

Sunday I called another friend and asked who the holistic doctor was that had diagnosed her with Hashimotos’ disease a few weeks prior after she had spent months trying to find the source of her fatigue! She gave me the name of her Doctor and we made the first available appointment for Max.  We knew we needed answers, and no one had been able to give them to us at this point.

Within a few days of running tests, they called us back to the office.  Max had an auto-immune disease (but not diabetes like his brother); Max had leaky gut and irritable bowel caused by intolerance to dairy and gluten.  The pizza and ice cream party was basically the straw that broke Max’s back.  Also on the list of culprits: eggs, anything orange-colored like salmon, oranges, sweet potatoes, and pineapple.  My first thought was “what the BLEEP are we going to feed this child?”.  The doctor said we needed 2 steps:  gut healing and diet revamp to Paleo.  No processed foods and lot of supplements.  We learned it takes about a year to heal a gut lining, and any major relapse restarts the clock.

So now I had one son that could eat anything as long as it was served with a dose of insulin, and another son that couldn’t eat half or more of the foods we had in the house.  Holy %&@(@!

We set out to the grocery store and bought every gluten-free and dairy-free food we could lay our hands on! The bill was staggering!  No more economical processed foods of any kind.  A meat and 2 non-orange vegetables for every meal.  Imagine making family dinners with no flour, bread, dairy, eggs, mayo, orange/yellow fruit, etc.  None of our recipes would work anymore.  Our meal plan went into the shredder.  We just tried to get through the first week or two, then we realized how tough and expensive this got very quickly.  Half of the gluten and dairy free foods tasted terrible or didn’t turn out according to the instructions. We started trying to convert our favorite recipes to exclude flour, dairy, and eggs.  Not simple, or tasty, just saying! We did the same tests on our daughter Kayla, and she too had to limit dairy and gluten, yet not to the extent of Max.  It became a comparison of who was worse off and all 3 kids irritated with each other over “who had it worse”.

Everyone in the house complained about restricted meals and the grumpy scale was at an all-time high. I knew that I needed to learn more and FAST!

I started reading everything I could find on autoimmune (some information was so technical that it went right over my head). I needed basic explanations and a new strategy for family peace and health.

So here we are trying to help other families with similar struggles find their way when they get an auto-immune diagnosis.  While our focus started on the kids, we soon found out that the root of auto-immune diseases effects most of us, even when we don’t know it.  As parents in our 40’s, we knew we were also getting negative health consequences from a high-gluten diet.  Now we are writing recipes and guides to help everyone improve their health, with a focus on clean eating and avoiding/reversing some auto-immune issues. We have learned a LOT in the last 2 1/2 years! Thus, the birth of the One Month Body Reboot we used to get everyone back on track!  If it can turn our family around, we hope it can help yours too!

We hope you will take this journey with us!  We would love to share the path with you…

Please sign up here to get recipes and news …….

We will send the Paleo Shopping Guide Straight to your email!

Latest posts by Lara and Darren Larson (see all)

Welcome to My Strong Life! We are Darren and Lara Larson and we are here to help YOU and YOUR FAMILY reboot your health! 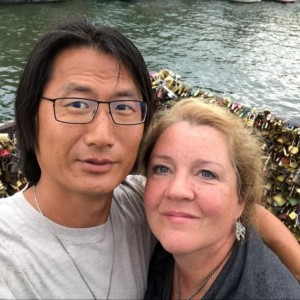 Hey there! I'm Lara, mom, coach, teacher, and wife. We are here to help families re-boot their health by understanding the foods they eat, the nutritional support they need and how to stay active. We have experienced Auto-Immune disease in our family and our knowledge has changed our lives! We would love to help you too! I am also a Certified Essential Oils Coach if you need help! Read Our Story here…

How I got rid of my Allergies!

I will send you my Secret to getting rid of my Allergies straight to your email.

This error message is only visible to WordPress admins

Stay Up to Date With All the Latest

This error message is only visible to WordPress admins

This site uses cookies to analyze traffic and to improve your experience. We just wanted to let you know and we are glad you are here! Find out more.